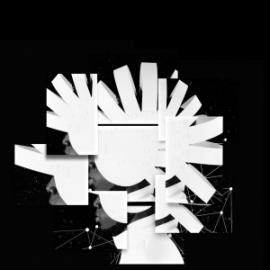 AfrotoniX is a character who embodies an Afro-futuristic universe by sporting a helmet with a unique design (inspired by the group Daft Punk). His first self-produced concert took place in 2014 at the SAT in Montreal. The shows then multiplied! Caleb has collaborated with many artists, such as Mbongwana Star or Young Paris, and he collaborated on the production of the latest album by Vieux Farka Touré.

Caleb intends to renew the image of Africa. The artist wonders about the state of the African continent, its role to play in the future, its perception in the collective imagination. AfrotroniX merges electronic music, African rhythms and Touareg blues. The shows combine DJing, instruments and Afro-urban choreographic performances, all energized by a futuristic visual universe.

At the crossroads of Montreal’s artistic dynamism and Chad’s cultural richness, AfrotroniX gives place to African music in the digital era. In 2017 after the release of their first album NomadiX, AfrotroniX embarks on an international tour. The press and the public are very receptive: AfrotroniX is on its way to embodying the future of African pop.